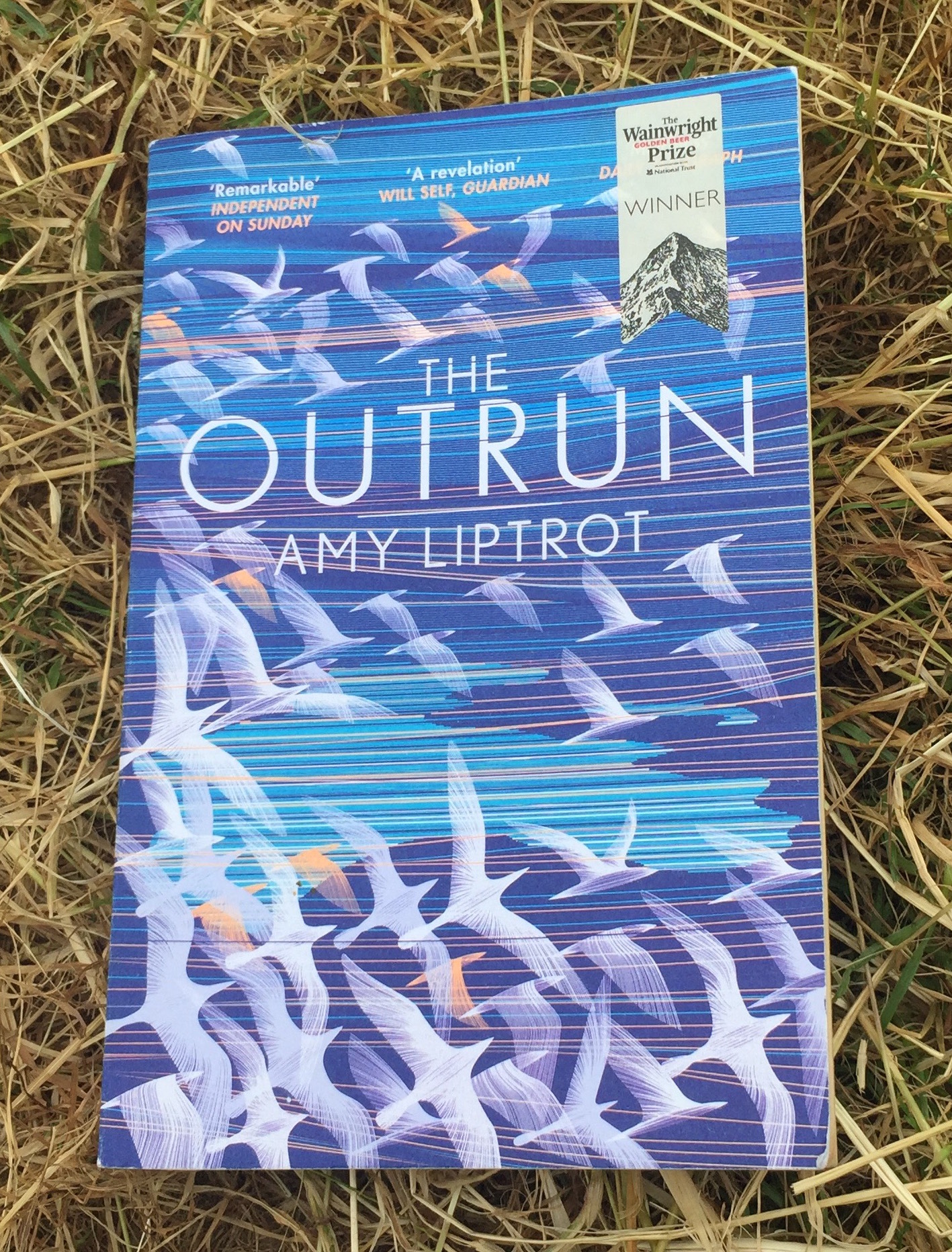 At Glastonbury this year, I talked to best-selling author Amy Liptrot about the success of The Outrun, how to write a memoir and what she’s writing next.

Amy Liptrot’s book, The Outrun, has been an extraordinary success. A Sunday Times Top Ten best-seller, it won The Wainwright Prize and has just been awarded the PEN Ackerley Prize.

The Outrun tells the story of how Amy grew up on her family’s farm on Orkney, where her life was “rough and windy and tangled”.

Longing for the bright lights, she travels to London where she loses herself in a landscape of beer, vodka and party drugs, blurring her life at the edges until it becomes impossible to hold on to a job, a flat or a relationship. One morning, “struck by the dazzling glimpse of possible sobriety”, she decides enough, no more, and signs up for rehab.

After treatment, Amy heads back to Scotland and rediscovers a different kind of wildness on the islands of Orkney, counting corncrakes at night, looking out for the Northern Lights and immersing herself in the freezing sea with the Orkney Polar Bears wild swimming group. Only one in five people are sober 90 days after leaving rehab. Against the odds, she gains and maintains sobriety.

Amy’s voice is both tough and vulnerable. Even as she describes her darkest moments, you sense a steely resolve that must have fuelled her recovery. One passage in particular gave me goosebumps. When she is attacked in London, she screams out at the man who has clumped her in the head with a heavy boot: “I am stronger than you.” You believe her.

Live at the Crow’s Nest 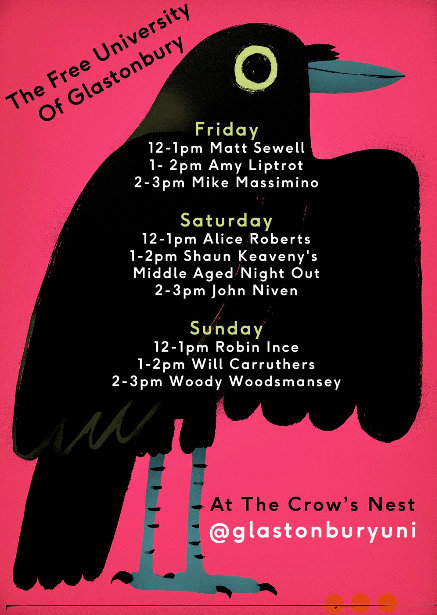 Our conversation took place at the Crow’s Nest, a tent at the top of a hill that has an extraordinary view of the whole festival, overlooking the Ribbon Tower and the Park stage. During the day, the Free University of Glastonbury puts on talks by authors, musicians, scientists, bird watchers and comedians. In the evening, bands playing other stages at Glastonbury come up the hill to play off-schedule, unannounced gigs. Far from the madding wellies, it’s one of the best places to hang out at the festival.

I was excited about interviewing Amy not just because of her spellbinding descriptions of nature, but also because she writes about addiction and mental illness in such a compelling way. The book opens with a scene where her mother arrives back on Orkney holding new-born Amy in her arms, just as her father, restrained and sedated during an episode of manic depression, is about to be taken off the island to hospital by helicopter.

This resonated with me as manic depression runs like a fault line through my family, zig zagging, skipping a generation here and there. There are stories of a brilliant but troubled great uncle who swam up a river to work each day, and I recognise all too well the anxiety caused by the first signs of mania: my grandmother’s whirlwind shopping trips that tipped so fast from fun into frenzy.

The illness leapfrogged my sister and me; other relatives were not so lucky.

At home on the edge

Amy started by reading a passage from the end of The Outrun that summarises many of the book’s themes.

I grew up in some extremes and later sought them for myself, unconsciously emulating unremembered experiences. Now, I still pursue heightened states but do so with greater self-knowledge. I want to have a story but I have to do it sober…

When I am experiencing the impulse to drink, I try to examine it further, that false promise. I am experiencing discomfort and want something to provide flow and easiness. I want something to take the edge off. But I’m realising that times of anxiety are necessary and unavoidable and, in any case, I like the edge: it’s where I get my best ideas. The edge is where I’m from. It’s my home.

The theme of losing her edge, or her cool, recurs throughout the book. And I think that part of her appeal lies in her dismissal of what others might consider to be cool and looking instead to “the surprises of my natural surroundings to stir my imagination”.

But why does Amy think The Outrun has attracted so many readers? “People read the book for different reasons,” she says. “Some want to read a memoir about recovery from addiction, while others are interested in nature and life on the Orkney islands.”

Although she admits with a laugh, “People project their own realities onto the book. One reader in America idealised the Scottish islands as a place that the 21st century hasn’t touched, despite the fact that there’s a chapter called ‘Online’.” 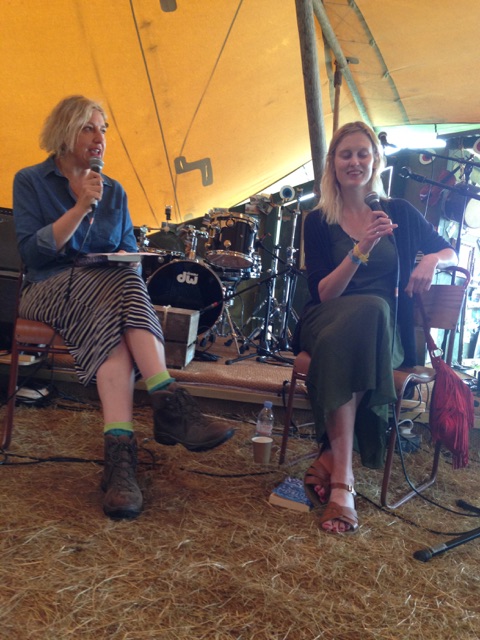 Chatting to Amy Liptrot at the Crow’s Nest, Glastonbury

The book initially grew from a series of nature blogs that Amy wrote for Caught by the River, a music/publishing collective devoted to the outdoors. “The blogs form the core of the book,” she says, “but none of it was particularly easy to write. It took a lot of drafts and redrafts.”

The book dances between city and island life to illustrate the links between the two. A tower block reminds her of the cliff face of St John’s Head on Hoy, the tallest cliffs in the UK. Watching the Northern Lights, she realises that: “I’ve swapped disco lights for celestial lights but I’m still surrounded by dancers. I am orbited by sixty-seven moons.”

How to write a memoir

Asked for tips on how to write a memoir, Amy says that she’s always written journals, which provided valuable source material for the book. She also studied journalism and worked as a music journalist, writing articles for The Face and NME. This experience honed her writing skills but, she says with a wry smile, “I wasn’t a very good journalist because I was drunk all the time.”

However, she adds: “One of the things I learned as a journalist was how to spot the odd or absurd detail in a situation, use that at the start of an article and spin off from there.”

Three of these details stand out for me in The Outrun.

Go for the raw detail

In The Outrun, Amy is very honest about her life as an alcoholic and in recovery. How did she decide how much to disclose? “I was in quite a desperate state when I was writing the book,” she says. “I really had nothing to lose, so I went for it and put it all out there.”

As for what to include and what to leave out, she was pragmatic about what would engage readers. “I left out the boring bits and homed in on the details that I thought would be most interesting.” She also made a conscious decision not to write about writing. In the book, she describes observing the Northern Lights and swimming with seals while she lived on Papay. She doesn’t say that during that time she was also working on the first draft of The Outrun.

Amy adds one more piece of advice for potential memoir writers. “It’s important to decide what kind of writer you are and who your book will appeal to. I decided I’m not a funny writer, so took out some of the jokes I’d previously included. And although the book appeals to people who love nature, I don’t position myself as an expert. I was learning about wildlife and the natural world as I was writing about them.”

You get the sense that, having been sober for six years, Amy is keen to look to the future. While the rest of us are only reading about her journey to sobriety now, she’s moved on.

“My next book is based in Berlin, where I lived for a year. It will be quite different from The Outrun, more experimental. It’s about observing people in a city in the way that you might observe animals in the wild.”

This makes me think of human tracks across the urban jungle, wild swimmers in Berlin’s lakes and, for some reason, foxes scrabbling in supermarket bins.

Whatever the new book is like, you can guarantee it will be a fresh take on the city and its residents. I look forward to seeing Berliners through Amy’s eyes.