The power of charity stories 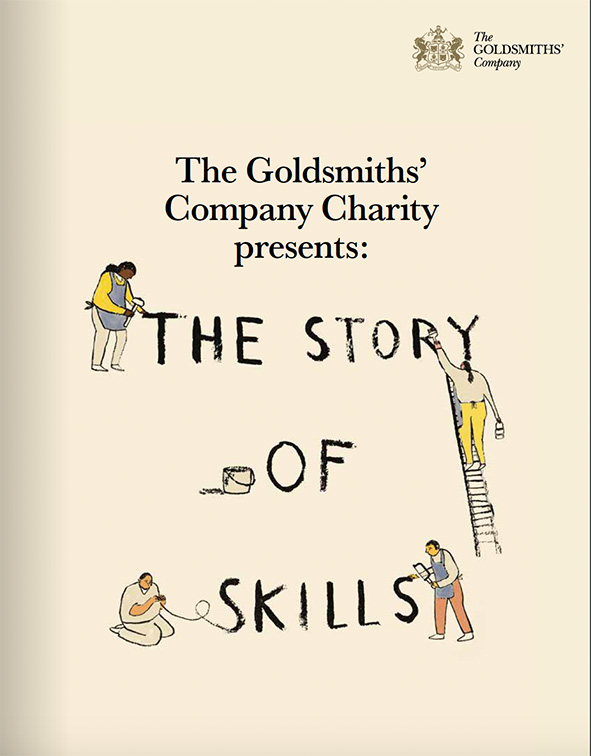 Charity stories are an incredibly popular and powerful way to convey the essence of what a charity does while engaging with readers. It’s common to see charities using stories to lead radio appeals, donor appeals and cases for support.

I’ve written a variety of stories for charity clients. For example:

When it comes to demonstrating how a charity is making an impact, stories definitely pack a punch.

That’s why I was delighted to be asked to write a series of stories for The Goldsmiths’ Company Charity to demonstrate the impact of their charitable activities. The stories act as an adjunct to their annual report and offer readers a detailed insight into who the charity is supporting and why.

First, a bit of background. The Goldsmiths’ Company, one of the City of London livery companies, has a long tradition of making a substantial contribution to national life. Since it was founded some seven centuries ago, it has set up partnerships that make a positive, lasting impact both on the trade it serves and on the lives of people in diverse communities across the country.

The Story of Skills

The Goldsmiths’ Company asked me to write ‘The Story of Skills’,  a series of 1,000 word stories that illustrate how and why they have supported different charities. The common theme was improving skills, with many of the projects involving prisoner rehabilitation.

For this project, I interviewed the leaders of four different charities to discover how the grants given by The Goldsmiths’ Company Charity had helped support their work. I also interviewed Judith Cobham-Lowe, a Director of the Goldsmiths’ Company, to write two further stories: one about the charity’s support for a junior school maths project in Kent and another about the charity’s Community Engagement Awards.

Anawim: A women’s centre in Birmingham 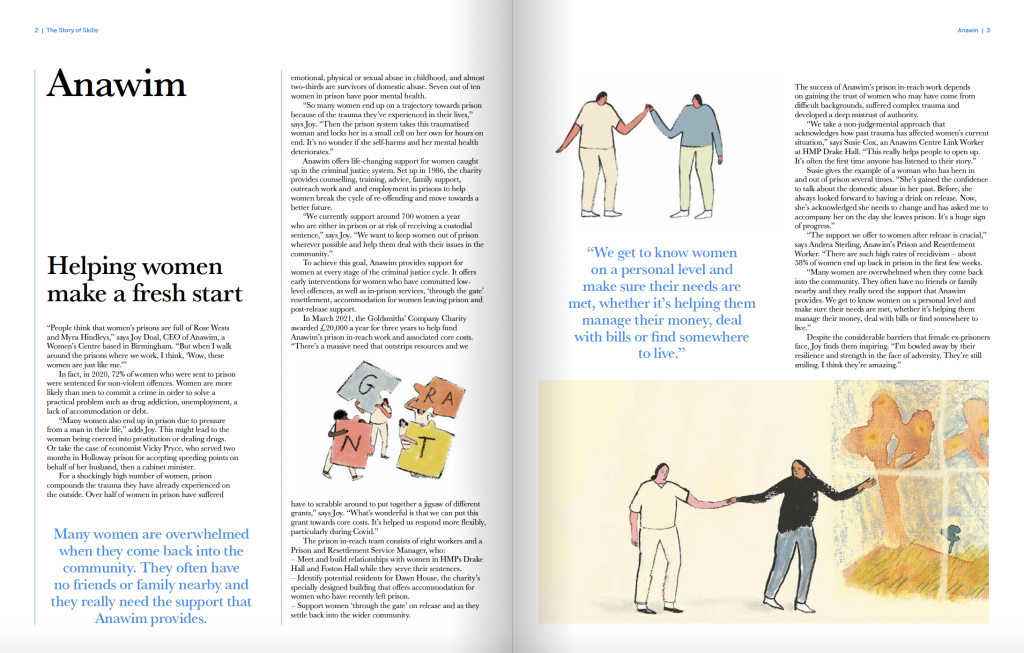 Anawim, a women’s centre based in Birmingham, helps women to stay out of prison where possible and deal with their issues in the community. Last year, it helped 700 women. For this story, I interviewed Joy Doal, the charity’s CEO, as well as two other key people on the team: Susie Cox, an Anawim Centre Link Worker at HMP Drake Hall and Andrea Sterling, Anawim’s Prison and Resettlement Worker.

“People think that women’s prisons are full of Rose Wests and Myra Hindleys,” says Joy Doal, CEO of Anawim. “But when I walk around the prisons where we work, I think, ‘Wow, these women are just like me.’”

The story starts with this vivid quote from Joy, then goes on to explain how rehabilitation is vital in helping to stop the cycle of offending that rips through the lives of prisoners and their families. 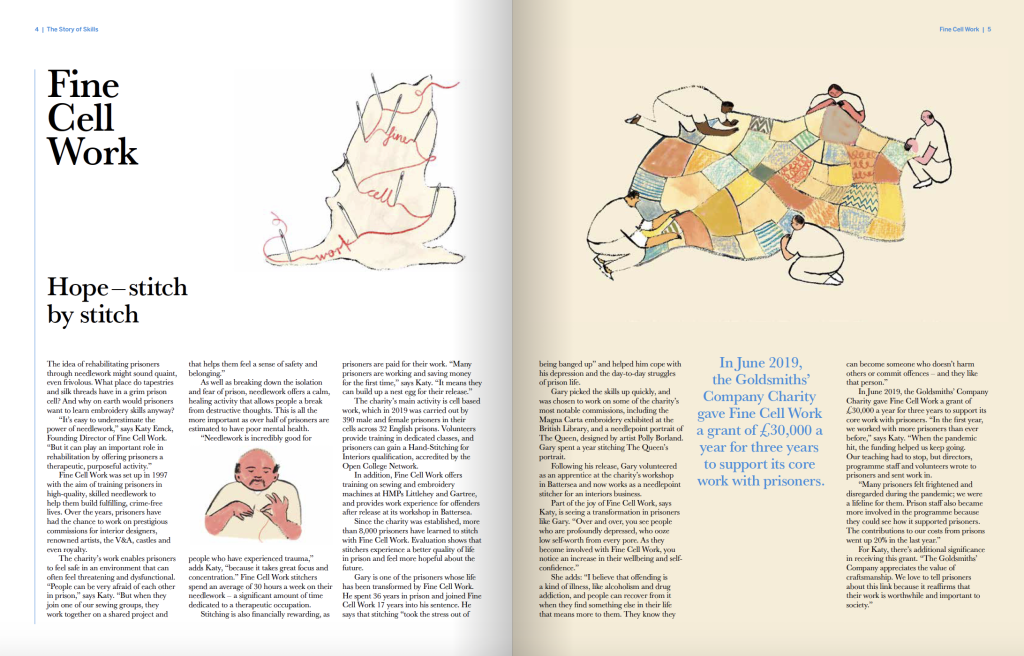 When the Goldsmiths’ Company asked me to write a story about Fine Cell Work, it was a particular delight. Since Autumn 2019, I’ve been working with writers from 26, the writers’ organisation, to produce a book to celebrate 25 years of the charity.

The book, Threads of Time, launched this month and is now available to buy from the Fine Cell Work website. You can also read more about our Crowdfunder campaign to raise money to produce the book.

Katy Emck, the charity’s founding director, shared the story of Gary, one of the prisoners who had benefited from Fine Cell Work training. He found that stitching “took the stress out of being banged up”, helping him cope with his depression and the day-to-day struggles of prison life.

No Going Back: all-round support to turn lives around 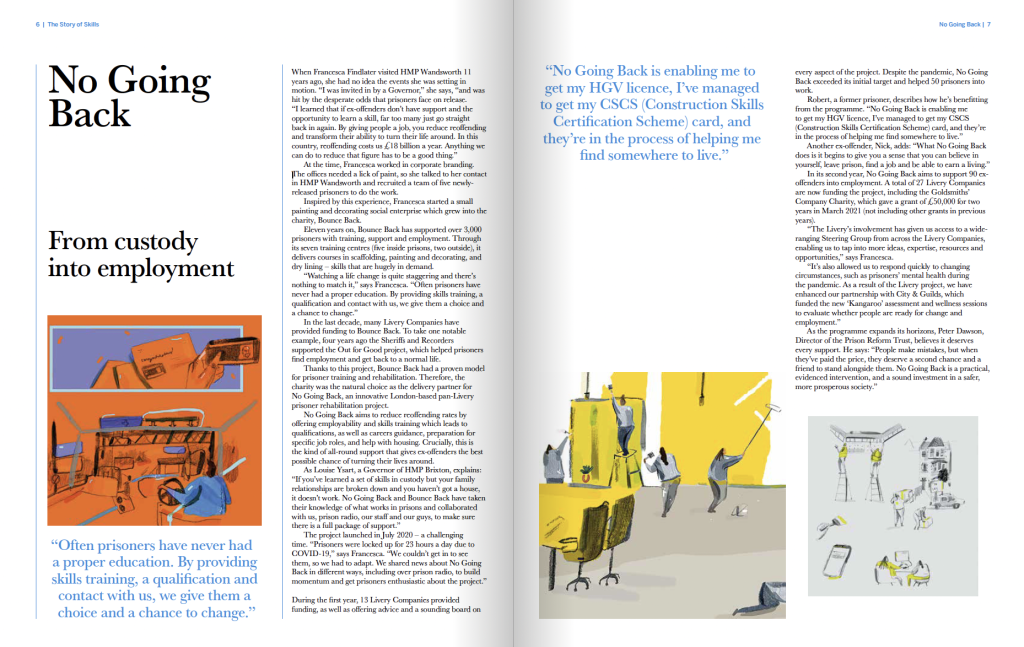 The story of the No Going Back project started when a governor of HMP Wandsworth invited Francesca Findlater in for a visit. Hit by the desperate odds that prisoners face when going back into the community, Francesca decided to do something about it.

She began by hiring a team of five newly-released prisoners to paint the offices of the design company where she was working. This led her to set up a charity, Bounce Back, which has now supported over 3,000 prisoners with training in scaffolding, painting and decorating skills.

“Watching a life change is quite staggering and there’s nothing to match it,” says Francesca Findlater.

The Goldsmiths’ Company provided a grant to No Going Back, a project delivered by Bounce Back, which has helped 50 prisoners back into work so far.

The Clink: training prisoners in hospitality and horticulture 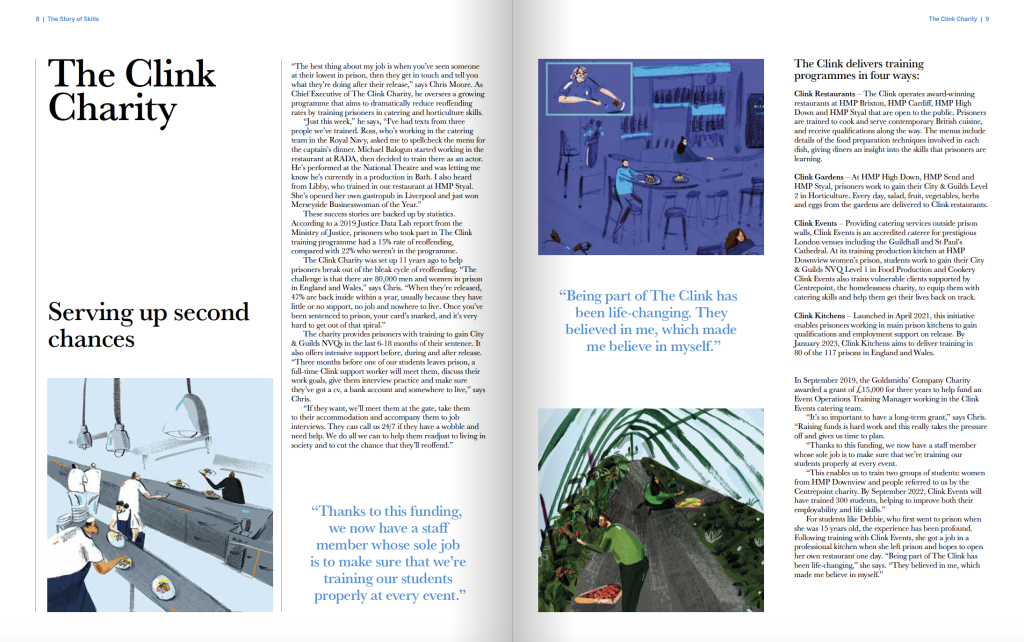 When I asked Chris Moore, then the Chief Executive of The Clink Charity, what he loved about his job, the answer was illuminating. He told me about three texts he’d received that week from ex-prisoners.

One man was on the catering team in the Royal Navy, and he wanted Chris to spellcheck the menu for the captain’s dinner. Another ex-prisoner was letting Chris know that he’d gained a part as an actor in a production in Bath. The third text was from a woman who’d trained in The Clink’s restaurant at HMP Styal and had opened her own gastropub in Liverpool. She told Chris that she’d just won Merseyside Businesswoman of the Year.

The story went on to describe how a long-term grant from the Goldsmiths’ Company Charity had funded an Event Operations Training Manager for the Clink Events catering team.

All of these stories demonstrate the impact of the charity by blending emotion (quotations from charity workers and charity beneficiaries) and facts (statistics about the difference the charity has made). It’s a powerful mix.

If you’d like me to write stories for your charity, please get in touch.

Two amazing illustrators worked on this project. Contact them here: