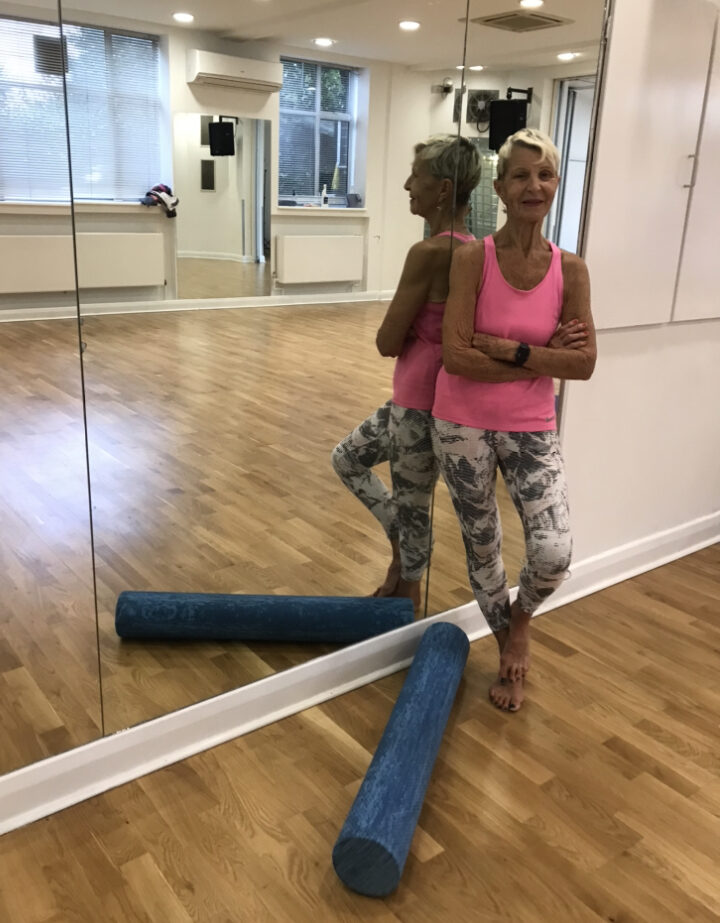 “The other day, it was lunchtime, boiling hot, 23 degrees, and I was sitting in the park wearing my bikini,” says Joan, who’s 82. “A woman walked past and said, ‘How wonderful that you’re doing that. I wish I had the guts to do what you’re doing.’ And I said, ‘Do it! Why not?’ Nobody was taking any notice of me and I was just enjoying the sunshine.

“The best thing about getting older is that you don’t care what anyone thinks or says about you. They can think and say what they like. Of course, some of the time, it hurts a bit. But most of the time, it just bounces off.”

Joan teaches Pilates at my local YMCA gym. And anyone who turns up expecting an easy class is in for a surprise.

“Come along!” she’ll say, as people 30, 40 and 50 years younger than her do their best to hold a side plank for as long as Joan or to carry out a complex boomerang sequence as elegantly.

Then she’ll ask a rhetorical question, “Shall we make it harder?” before leading us in a new exercise that has our triceps, abs and glutes quivering in its wake.

The path to Pilates

Joan has loved movement and dance for as long as she can remember. As a child, she was inspired by her mother. “She was a beautiful dancer, an incredible diver and swimmer. She used to take me and my sister to the Ann Haywood School of Dancing in Harrow for ballroom classes.”

By the age of 15, Joan’s attention had swung from ballroom to jive. “I used to go out dancing in the clubs on Oxford Street. I loved the jive, the music, the boys. I danced all the time. Wherever we went, there was music and we danced.”

After school, Joan became a hairdresser, then started learning yoga when she was pregnant with her daughter. After teaching yoga for many years, she discovered Pilates about 25 years ago, and switched her allegiance. “Pilates made me feel quite different to all other forms of exercise,” she explains. “It really helps you understand your body.”

A role model for the future

I wonder if everyone in that class looks at Joan and hopes they’ll be as fit and flexible as her when they’re 82.

It’s not just Joan’s physical fitness that’s inspiring, though. It’s her attitude. She’s always interested in new ideas and fresh experiences. She’s the first to see new films, is constantly out at the theatre and was recently enthusing about dancing the tango at an open air Latin American festival in Finsbury Park.

“I don’t understand it when people don’t want to explore things,” she says, “why they’re not inquisitive, why they want to stay in the same narrow lane all the time.

“I did something new yesterday: table tennis. My sister asked if I fancied a game and said she’d organise it. Of course, I got a bit competitive and did some practice first. I couldn’t hit the ball at the beginning, but I’ll get better.”

The most annoying thing

Joan admits there are downsides to getting older. “I’ve always been forgetful, but I’m more aware of it now. But I don’t let it get to me. If I forget someone’s name, I go through the alphabet in my head until I get it. And I will get it.”

A pattern is emerging in Joan’s approach: optimism and persistence are key.

How to live life to the full

Here are Joan’s suggestions for retaining your joie de vivre, whatever your age:

A version of this article first appeared on Qwell, a site that provides mental health support for adults in some areas of the UK.

To discover more about the blogs that I write for clients, have a look here.

And here’s some vintage footage of Joseph Pilates (1883-1967), who invented the method.