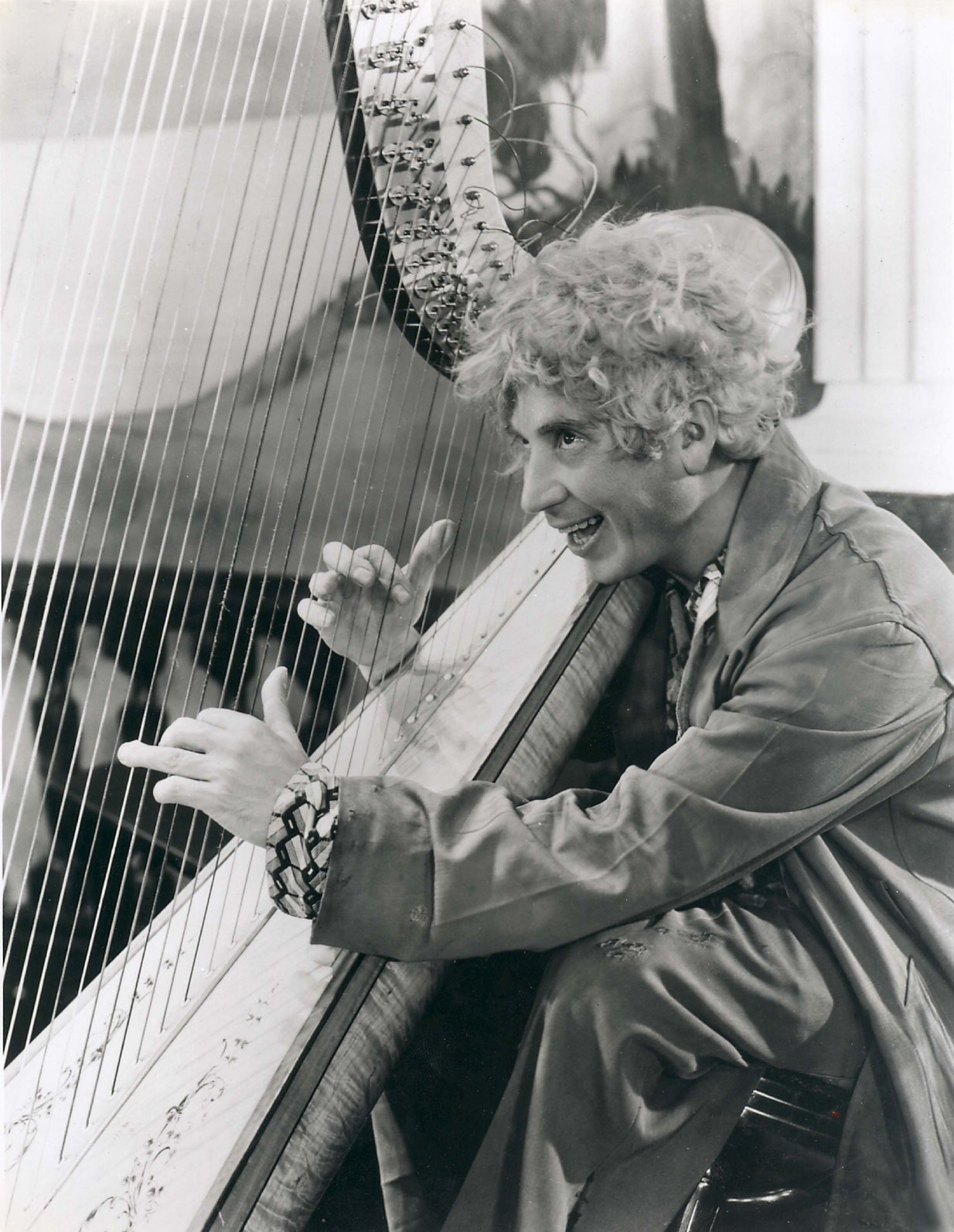 Have you heard about the musical duel between Harpo Marx and Sergei Rachmaninoff? Craig Brown recounts the story in One on One, his book about extraordinary encounters between famous people. (There’s a reason why I’m writing about this now. I’ll come to that later.)

In 1931, Harpo Marx had taken an apartment in Los Angeles in The Garden of Allah, a hedonistic retreat that attracted all the Hollywood stars of the day. Apparently, Marlene Dietrich used to like to swim naked in the pool. For Harpo, though, the main attraction was the chance to dedicate himself to the harp. He described The Garden of Allah as “the best place to practise I ever had”.

Harpo was not a conventional harpist. He taught himself to play and never learned to read music. His fingers scuttle, crab-like, up and down the strings. There are rumours that he deliberately tuned the harp to a lower pitch to relax the strings and give them more ‘twang’. Yet despite his idiosyncratic style, his brilliance shines through.

Harpo was devoted to the harp and practised for several hours a day while he was living at The Garden of Allah. Until a new neighbour moved in. A pianist who played so loudly that he couldn’t hear anything above a forte on the harp.

Harpo complained to the management. They refused to ask the neighbour to move out. Next, Harpo discovered that the pianist who was disturbing his practice was Rachmaninoff. At the time, the composer was 58 and was taking a break in Los Angeles before embarking on an extensive US concert tour involving 50 performances.

Harpo knew that the managers wouldn’t kick Rachmaninoff out of the complex, so he got creative. In his memoir, he writes: “I opened the door and all the windows in my place and began to play the first four bars of Rachmaninoff’s Prelude in C Sharp Minor, over and over, fortissimo.”

Written when the composer was only 19, the Prelude became one of Rachmaninoff’s most popular pieces. The work is also known as ‘The Bells of Moscow’ due to the deep, resonant opening chords that are said to sound like the chimes of the Kremlin carillon.

It’s not an easy piece to play on the piano, but it’s almost impossible to play on the harp. On the piano, you have all the notes – naturals, sharps and flats – laid out in front of you. On the harp, each string can only be in one position at a time – natural, sharp or flat. If the key changes or you need an accidental, you have to change the pedals. A complicated series of pedal changes can make a piece difficult, even if the notes are easy to play.

I love the Prelude and was keen to play it on the harp. Here’s a picture of some the pedal changes in the first four bars. Challenging, to say the least. In fact, the only time I’ve heard the Prelude work successfully on the harp was when it was played by a harp quartet. Divide those pedal changes between four harps, and the piece starts to look playable.

To play this piano piece on the harp, you need to add a few pedal changes and be ready for some nifty footwork

So, props to self-taught Harpo for playing this piece. He must have had a wonderful ear and been extremely gifted to navigate all those pedal changes. It’s a shame that film footage of Harpo tends to focus on his hands. I’d love to have seen an insight into his pedal technique.

Harpo couldn’t have known it, but he’d chosen the perfect piece to get under Rachmaninoff’s skin. The Prelude was so popular that audiences used to shout out “C Sharp!” in the hope that the composer would play it for them. By 1931, Rachmaninoff had been playing the Prelude for almost 40 years and was, frankly, heartily sick of it.

For two hours, Harpo hammered out the first four bars of the Prelude. His fingers were almost numb. But he didn’t stop until he heard a thunderous crash of hands thumping on piano keys, then silence. Rachmaninoff asked to be moved to another part of the Garden of Allah, and Harpo was able to resume his practice routine.

I have sympathy for both parties. The harp is a relatively quiet instrument. Just try tuning it if a trombone is playing next to you. On the other hand, poor Rachmaninoff. A concert pianist and composer at the height of his powers, trying to rehearse for an important US tour, he’s tortured by hearing his own composition, stuck on repeat for two hours.

It seems likely that this incident stuck in Harpo’s mind. As Craig Brown points out, six years later Harpo played the Prelude on a grand piano in A Day at the Races. His playing becomes increasingly frenzied until the piano lid falls off, numerous keys fly up in the air and – finally – the legs collapse. Gleefully, Harpo steps on the keys and pulls out the harp-shaped internal frame and strings. Calm now, he sits down and ‘plays’ a flowing romantic piece on the piano strings, holding the frame as if it were a harp.

A night at the opera

Why write about this now? Here’s my somewhat wiggly train of thought. My orchestra, the London City Orchestra, is playing a Night at the Opera concert next Saturday. The Marx Brothers made a film called A Night at the Opera. They also made A Day at the Races, where Harpo massacred Rachmaninoff’s Prelude in C Sharp Minor. Harpo and Rachmaninoff once held a musical stand off, with Harpo using the Prelude as an audio weapon.

It’s a tangled trail, but I thought it gave me just enough of an excuse to recount this wonderful story.

Do come along to our concert. We’re playing excerpts from:

Do have a look at One on One by Craig Brown. Each story leads on to the next. Before the musical duel between Harpo and Rachmaninoff, you have the story of the time when Tchaikovsky examined 15 year old Rachmaninoff at Moscow Conservatory. Afterwards, George Bernard Shaw rips Harpo’s towel away while he’s sunbathing in the Cap d’Antibes. It’s unclear why he does this.

While I was idly wandering about YouTube, I found this recording of Rachmaninoff playing his Second Piano Concerto. I heard the sublime Yuja Wang play this recently at the Barbican. But how fascinating to hear the composer’s interpretation.