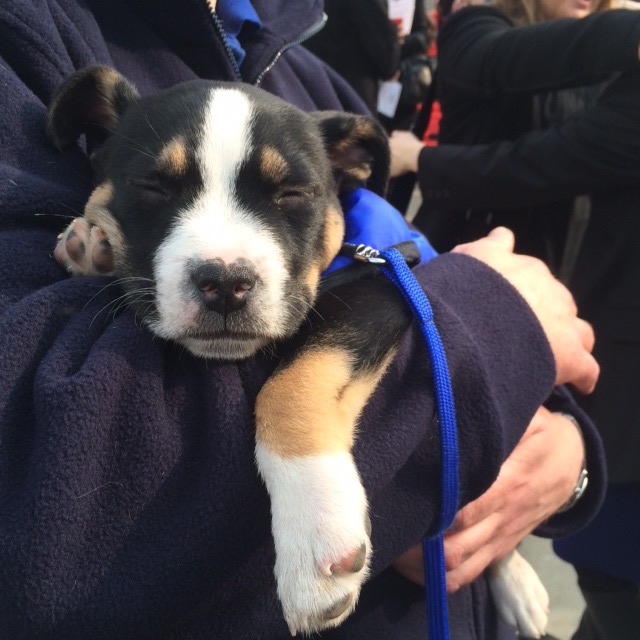 More and more of my work these days is for charities. In the last month, I’ve written an annual report for Help Musicians UK, fundraising materials for The Brooke and a report for The National Trust.

But as well as my everyday work as a freelance writer, I also wheel out my harp on occasion to help out at charity fundraising events.

The latest one was at Battersea Dogs and Cats Home on 17 March to celebrate the launch of the charity’s new kennels. Following several years of fundraising, the charity had raised £4.8 m and was finally able to open the doors to the brand spanking new facilities that will replace its crumbling old Victorian kennels.

It was a pretty special occasion because the Queen, a patron of Battersea since 1956, was going to be there, along with Prince Philip and Princess Michael of Kent.

I had to get there by 10am to comply with security restrictions, and came through the Sopwith Way entrance which leads directly to the new reception centre and kennels.

The grounds had already been checked by sniffer dogs and Metropolitan police firearms officers in baseball caps.

A marquee had been set up, and black-clad staff were buzzing around titivating flowers, sorting out audio visual equipment and preparing lunch.

Inside the Battersea offices, three of the loos were cordoned off, presumably designated for Royal use only. They say the Queen is haunted by the smell of fresh paint. I checked later in the day when they were reopened to civilians. No fresh paint, just the scent of pot pourri.

In the offices where I was waiting, the sense of anticipation was like the run-up to the office Christmas party on steroids. Everyone was dashing around, buzzing with excitement at the event, the most important and high-profile in the Home’s history.

A trio of fundraising women were dressed, by chance, in red, white and blue, and there was also a very dashing kilt on display. As the clock ticked towards midday, women shrugged off cardigans and slipped on high heels, dressed in their glamorous best.

Following a lunch party hosted by Princess Michael of Kent, a doggie guard of honour assembled by the gates at Sopwith Way. All the members of staff had their own dogs with them, each one adopted from Battersea. It seemed as though many of the staff had started by fostering dogs, then adopted them as a permanent part of the family.

My favourite – in fact, everyone’s favourite – was an 11 week old collie/staffie cross called Elsie whose mother had died when she was only a day old. Elsie was hand reared by a member of staff at Battersea, who ended up adopting her.

The Queen and Prince Philip arrived at 3pm. I was standing near the back and could hardly see her, but my phone captured a lucky wonky overhead shot seen here. She visited the new kennels and met Beama, a 12 year old corgi who’d been adopted from Battersea and recently returned there, when his owners could no longer cope with him.

Sadly, Beama didn’t find a new home at Buck House – or even a country retreat at Sandringham. Apparently the Queen’s not taking on any more dogs. But I hope all the publicity will mean that someone else will rehome him soon.

While HRH was having a tour of the kennels, everyone else piled into the marquee, which was prettily decorated with bunting and masses of sweet-scented flowers.

The canine guard of honour assembled outside again, but by this time, some had had enough of standing to attention. An elderly English bulldog lolled around and a staffie cross lay his head on his paws. They didn’t want to sit up and wait for the Queen. They wanted to lie down on the red carpet and see if a canape was likely to roll off a table in their direction.

The Queen came into the crowded marquee and unveiled a plaque, then processed out. I got some blurry shots of her through the plastic window of the marquee where she’s hardly identifiable as our monarch. You can just spot the beige coat and hat, and a stately black handbag.

I’d love to say I’d played the harp for the Queen, but that wasn’t to be. The official running order says:

15.50 The Queen and Prince Philip leave the Home via Sopwith Way arch.
15.51 AV controller to announce performance by harpist Fiona Thompson and details of the kennel tours.

So close. Luckily, though, there were still plenty of people around in the marquee, who were chatting, having cups of tea and eating the elegant rectangular sandwiches (no crusts) and miniature scones with cream and jam.

And that was my brush with royalty. Not so much through a glass darkly as through a plastic marquee window faintly.

Now it’s back to the day job. Next task: writing fundraising literature for Battersea Dogs and Cats Home. Wonder if they’d lend me a cat or a dog as inspiration?