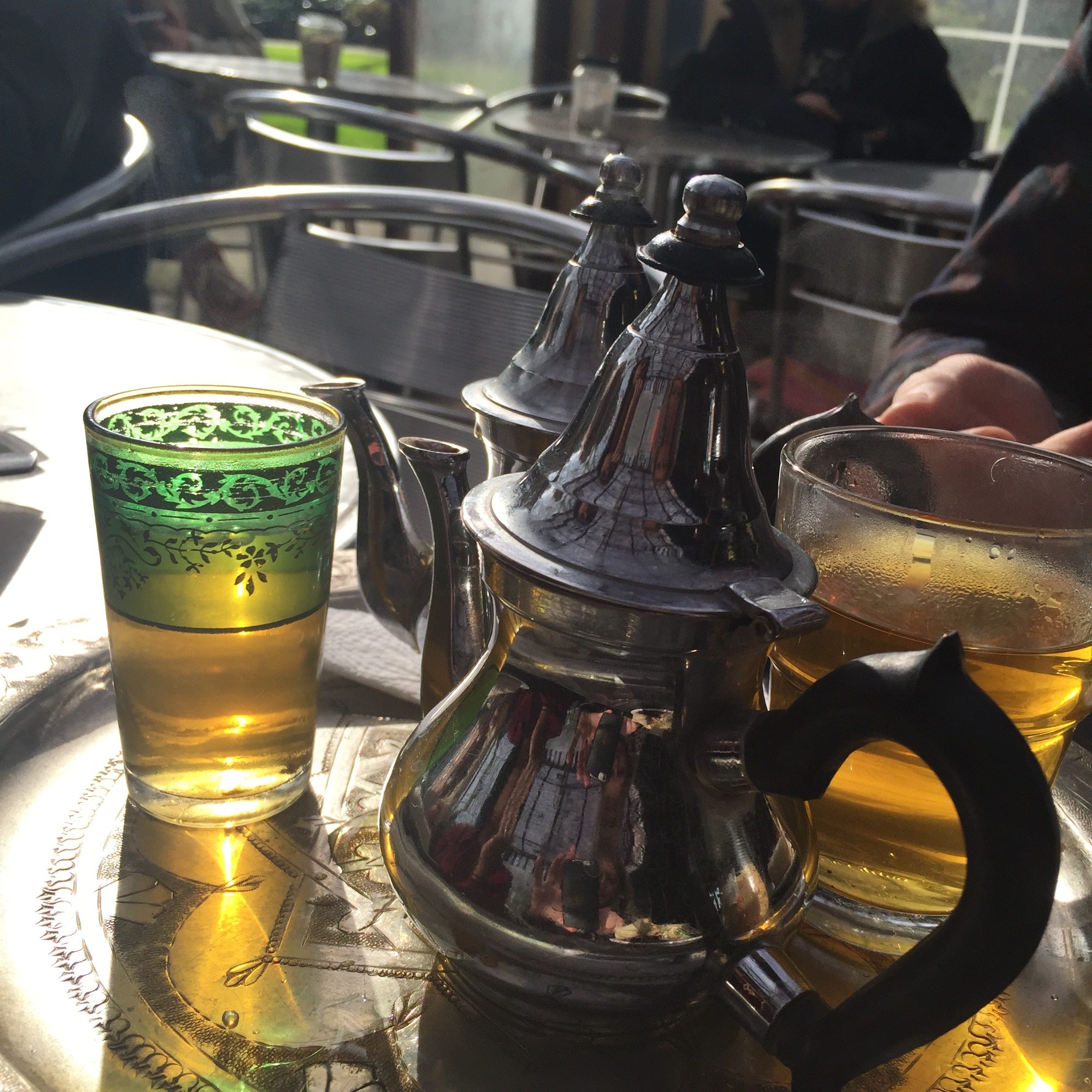 Creative fuel from The Story

I came away from The Story 2017 with my head full of stories – about hay fights on Southwark Bridge, a pickled pig foetus in a jar, robots that draw faces, banana phones and survivalist bunkers in Texas. This annual festival of stories and storytelling is always a joy, providing a rich source of creative fuel to draw on in the year to come.

Here are a few distilled drops of inspiration from the day on stories and storytelling techniques.

When his heart was broken, Inua Ellams joined Tinder – ‘purely for research purposes’.  And that’s how this multi-talented poet / playwright / performer / graphic artist / designer came to write ‘Swipe Slow’, a story of how he got the girl, lost the girl and is still trying to recapture that feeling.

Start with a flimsy pretext

“How do I find stories? I start with a flimsy pretex and then take a detour,” says Ingrid Burrington, who investigates infrastructure, data centres and apocalyptic compounds. Using this approach, she talked her way into a survivalist compound in nowhere Texas that has a fountain featuring a statue of Poseidon, but no bunkers yet. I like her suggestion. When you embark on a creative project, you don’t know how it’s going to turn out. The important thing is to start somewhere, and then explore. 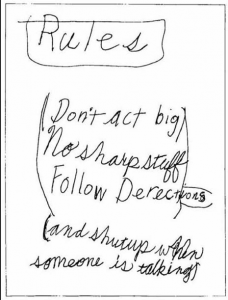 In their talk, Helen Andrews and Ian Tait of Wieden + Kennedy mentioned their agency’s original rules. ‘Don’t act big. No sharp stuff. Follow derections. And shut up when someone is talking.’ Pretty good rules for life. Although difficult to follow if you’re making marmalade and need to use the Sabatier…

Have one last big go

For decades, journalist David Conn valiantly pursued the truth about what happened when 96 people died at the 1989 FA Cup semi-final game in Sheffield’s Hillsborough Stadium. On the 20th anniversary of the tragedy, he said: “I’m going to roll my sleeves up and have one last big go.” His story led to new inquests that proved, finally, that the people who died had been unlawfully killed.

However, he added a cautionary note. “It still took 27 years. How many injustices are going unresolved for people who are more vulnerable and have fewer resources?”

Give a 16 year old a camera 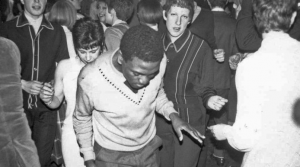 Ewen Spencer said the best advice on photography he’d ever heard came from fellow photographer Nick Knight who said: “Give a 16 year old a camera. Hide the results in a shed for 15 years then dig them out.” Paul Hallam unwittingly followed this advice, leading to a 2015 book ‘Odds and Sods’ featuring kids in the 1980s paying tribute to 1960s mod style. Ewen Spencer included Hallam’s photos in his Channel 4 series ‘Street Sound and Style’.

The question for everyone listening was: what stories are lurking in your shed / office / loft? And isn’t it time you dug them out?

Bring out your messy secrets

Victoria Mapplebeck also unearthed a buried story when she found an old Nokia phone in her kitchen drawer, abandoned for a decade. It contained 100 texts that told a story she’d tried to forget: her unplanned pregnancy and the tense relationship with her son’s father. The film, shot on an iPhone 6, is a powerful reminder of the stories that technology is archiving for us every day, which are scattered around our homes and workplaces.

Lynsey Hanley‘s writing draws on her experience of growing up working-class on a council estate in Birmingham. She described how out of place she felt at a sixth form college where other students were “wasting time smoking dubious substances in posh people’s attics”.

Back then, she felt awkward and excluded, but now recognises the power of being an outsider. “It’s the only way to see yourself and others,” she said. “Find a way, imaginatively, to be outside the group, wherever you are. Retain a sense of how it feels to be uprooted and anxious.”

It was fabulous to hear Clara Gaggero Westaway talk so enthusiastically about how her company, Special Projects, invents designs that make people feel good. “We want to erase cliche and enable empathy,” she said. Clara described how she’d worked with Samsung to create phones for older people, asking people to dream up their perfect device. Brilliantly, her company handed out bananas for testers to draw on, which resulted in magical phones that can deliver coffee and silence grandchildren. 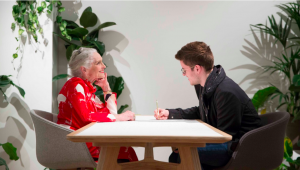 The ‘New Old Exchange’ at the London Design Museum, devised by Special Projects

Isn’t that a wonderful phrase – ‘change the nervousness’? Artist Patrick Tresset sets up installations where a series of five robots draw people at art fairs. “Robots are strange puppets becuase they work on their own,” he says. However, he alters the nervousness, or the way each robot interacts with the person it draws, to create different effects.

So how might you use this technique? Maybe it’s just about allowing space for a different approach or reaction when you’re telling a story or working on a creative project. Or you could try the Oblique Strategies cards developed by Peter Schmidt and Brian Eno to chance a new direction.

Lara Pawson read aloud from her book, This is the Place to Be, showing a fearless willingness to say the unsayable. Who else would admit to feeling a “lightness of being” when listening to the news on the day of 9/11? Has anyone else dressed up as Harold Shipman for a Famous Doctors fancy dress party? She creates a powerful narrative by removing her filter and saying exactly what she feels, even if her listeners feel an equal sense of unease as they hear it.

Walk a mile in size 12 stilettos

“You’re not in charge of the story, you’re a co-collaborator,” says Clare Patey, Director of the Empathy Museum. “It’s like a party. You might set up everything in the living room, but on the night, you find everyone in the kitchen. You just have to let go of your preconceptions.” Clare speaks from experience, here. She curated Feast on the Bridge for the Thames Festival and was initially horrifed to see people play fighting with her carefully arranged hay bales. But people were having fun and Clare decided to let go of her original plans. The next year, the hay fight became a regular part of the event.

Clare Patey invited strangers to walk a mile in another person’s shoes, from sex workers to sewer workers

Clare also talked about the importance of empathy. As part of her A Mile in my Shoes project, Clare invited strangers to experience someone else’s life by walking in their shoes, including a sewage worker’s waders and a drag queen’s size 12 stilettos. While walking, they would hear the owner of those shoes tell their story, creating an unusually intimate sense of empathy.

“You can’t decomplicate the process of reading and writing until it becomes nonsensical. It is complex,” says Kate Clanchy, an author who also teaches English in an Oxford state school. Kate’s story was fascinating because many of her students are recent immigrants to the UK with a limited understanding of English, yet she feels no need to dumb down the language. In fact, she’s successfully established a culture of poetry in the school and these ‘Very Quiet Foreign Girls‘ have written some extraordinary poems.

My favourite was by Priya, a girl from Bangladesh, who wrote about a jungle where a Bengal tiger “Obsolete as an emperor / breathes”. Kate spoke of the freedom that ‘the institution of the poem’ allows and her students’ work was potent proof. She gave a great tip for eliciting stories: “I never ask my students for their stories. I ask for their work and they bring their experiences and voices to it.”

Nikesh Shukla is the editor of The Good Immigrant, where 21 British writers of colour discuss race and immigration in the UK. The book has been a huge success, and he’s now crowdfunding its successor, Rife: Twenty Stories from Britain’s Youth.

Nikesh said he’d been told countless times that “People don’t read BAME writers” and said the result was that so many marginalised communities don’t feel reflected. And he reminded us of what the writer Junot Diaz said on the subject: “If you want to make a human being into a monster, deny them, at the cultural level, any reflection of themselves.”

Throughout the day, these common threads about storytelling emerged:

Right, I’m off to try this little lot out.

Thanks to Matt Locke for organising the whole shebang, to Sharna Jackson for MCing and to the ace live transcription team.