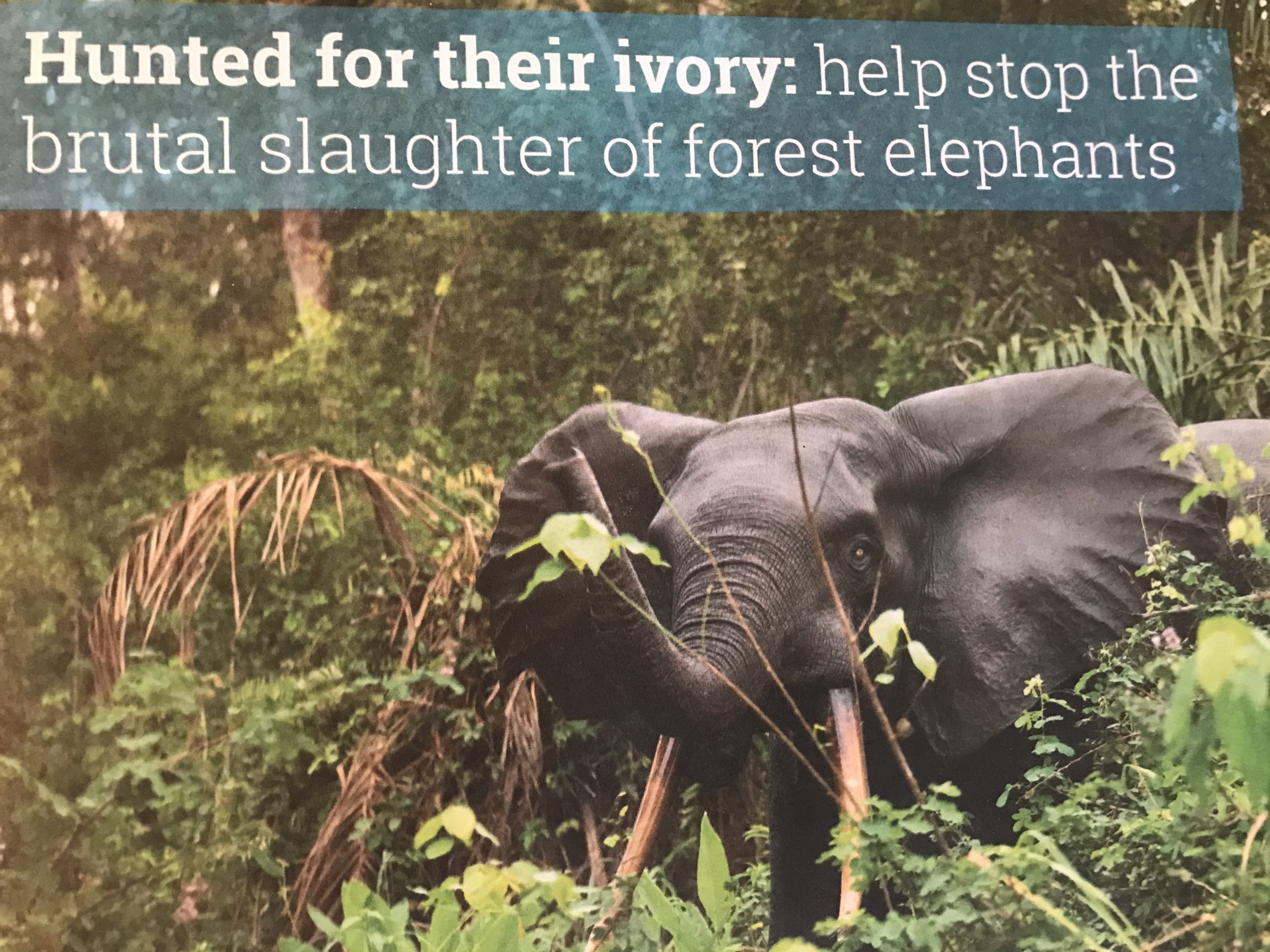 I’ve recently had the pleasure of working with the Environmental Investigation Agency on their winter appeal to protect the forest elephants of Africa.

The charity does amazing work to tackle environmental crime worldwide. So if you possibly can, please do support their work.

The plight of the forest elephants of Africa

The forest elephants of West Africa are in a desperate situation.

In just over a decade, the number of forest elephants fell by 65%. They have been cruelly slaughtered by poachers for their ivory and are now officially classed as vulnerable on the ‘Red List’ of threatened species.

Sadly, the distinctive character of the forest elephant’s pink-tinged ivory is highly sought after in Japan, the world’s largest ivory market. This makes it even more valuable to traffickers.

Due to the greed and corruption of international criminal gangs, forest elephants are being confined to ever-smaller areas of West Africa and are in danger of being poached to near-extinction.

The eco gardeners of the forest

The forest elephants of West Africa are known as the eco-gardeners of the forest because they play a vital role in maintaining the biodiversity and survival of their local ecosystems.

They eat the seeds of hardwood trees, which pass through their gut and are then able to germinate more easily. This helps preserve the large, slow-growing hardwood trees that store significant amounts of carbon and help mitigate climate change.

30 years of fighting for elephants

The Environmental Investigation Agency is currently celebrating the 30th anniversary of the landmark international ban on the elephant ivory trade. Its report, ‘A System of Extinction: The African Elephant Disaster’, was instrumental in helping to support the ban.

Since then, the charity has worked constantly to identify the trans-national criminal groups behind the trafficking of illegal ivory, expose corruption and shut down the ivory trade.

In 2017, as a result of the EIA investigation into a major ivory trafficking syndicate from the Chinese town of Shuidong, enforcement operations by Zhanjiang and Fuzhou Customs Anti-Smuggling bureaux led to the arrest of 27 suspects, 16 of whom faced criminal charges. The charity aims to expose and disrupt the criminal syndicates trafficking forest elephant ivory in a similar way.

On the trail of the traffickers

Now that the international criminal gangs are closing in on the forest elephants of West Africa, the EIA is hard on their trail.

The criminals in charge have absolutely no empathy for the magnificent animals they’re targeting. All they see is money. They could just as well be trading cigarettes, arms or timber. For now, though, they’re pursuing the profit they can gain from ivory.

This new phase of work is difficult and dangerous, and puts the charity’s undercover investigators at considerable risk.

If you can, please support the EIA’s work and help them save the threatened forest elephants of West Africa and their habitat before it’s too late.

See more of my work for charities.