How sound can tell a story 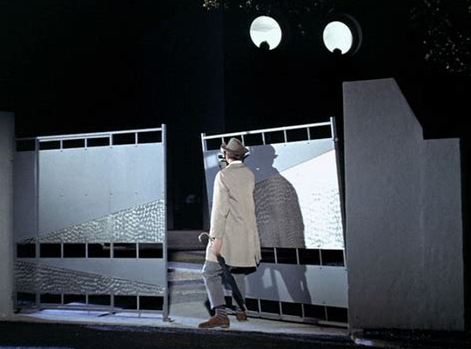 What can creatives learn from the way that Jacques Tati uses sound in his 1958 film, Mon Oncle? As someone who works with words, sometimes it’s great to come across storytelling that does away with them altogether. This article, written for a 26 / D&AD project, The Story Works, reveals how sound tells a story in Mon Oncle by Jacques Tati.

I love Mon Oncle. I love the way that Monsieur Hulot ambles through this 1958 film, with his pipe, his too-short trousers and his billowing mac, trailing chaos in his wake. I love the way he’s at home in the shambolic old district, but a flounder out of water in the modern world.

But most of all, I love the way that Jacques Tati (who directed and starred in the film) tells the story through sound rather than words.

So here are some of my favourite sounds from Mon Oncle, together with some thoughts on how they tell the story.

The kitchen that bites back

M Hulot is visiting his sister and brother-in-law, M and Mme Arpel, in their immaculate modern house in the suburbs. In contrast to the animated market in the old district, Mme Arpel’s buzzing, bleeping kitchen has all the charm of an operating theatre.

The cupboards are booby-trapped and every appliance produces sound and fury but little that you’d want to eat. The machines have the upper hand, but they can’t boil a decent egg.

As Mme Arpel tells her husband that M Hulot needs some order in his life, we hear a rhythmic ticking, like someone cutting daisies with tiny scissors. The couple look out from upstairs and see their imperious blonde neighbour manically pedalling a lawnmower in ever-decreasing circles around her miniature lawn.  The insistent, repetitive clack of the lawnmower tells us that there’s madness in her method.

Mme Arpel activates her metal fish fountain to greet important guests. We hear the ‘buzz-gurgle-buzz’ motif as people ring on the intercom, the water jet starts and the garden gate opens. She turns the fish off when a carpet salesman appears at the gate. She then frantically turns the fountain on again when she realises that the carpet salesman is actually her neighbour waving a poncho.

During a tea party, M Hulot breaks the fountain and the genteel afternoon disintegrates into chaos as the fountain springs a leak and spurts gravel over the guests. Mme Arpel’s attempts to control  her environment are outwitted by M Hulot and a big metal fish.

M Hulot is given a job at the plastics factory and asked to keep an eye on a colleague’s machine. Soothed to sleep by the rhythmic roar and slow hiss of the production line, he wakes up to find tubes snaking across the floor.

The machine judders, hiccups and starts to disgorge pipes that bulge with air pockets.  It then shifts into a pop-pop-pop rhythm that produces a stream of sausage-like links. Rhythm and efficiency reliably dissolve into disorder whenever M Hulot appears.

Throughout the film, the ordered ‘tip tap tip tap’ of efficient feet contrasts with M Hulot’s meandering, often circular, lope. A secretary’s heels resound sharply along the corridors of the plastics factory as M Hulot marks out a conga of white footprints across the floor. The Arpels tip tap precisely along the paving stones in the garden while M Hulot teeters on edging stones then sploshes through a lily pad into the pond. Life in the modern world is all time and motion, but M Hulot meanders along to a different beat.

Towards the end of the film, gadgets take over at the Arpel household. M Hulot’s nephew Gérard can’t be heard over the self-propelling vacuum cleaner, whirring kitchen gadgets drown out M Arpel and a shaver as loud as an aircraft silences Mme Arpel.  The family are alienated from each other by deafening labour-saving devices which eliminate all chance of human communication.

What else can I say? Watch Mon Oncle. Add your own laughter track. And listen to Tati as he tells a story without words.