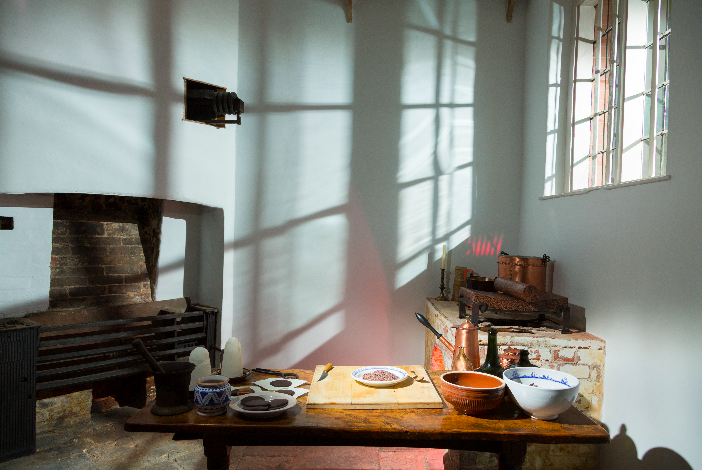 Charlotte Barker tells me how her research led to the discovery of a hidden Georgian chocolate kitchen at Hampton Court Palace.

A few weeks ago, I went to a storytelling workshop at the Tower of London. At the end of the day, we all had to tell a story relating to our work. Charlotte Barker, a curatorial assistant at the Historic Royal Palaces, stood up and told an extraordinary tale of how her research had uncovered a chocolate kitchen hidden away in the depths of Hampton Court Palace. Until recently, it had been disguised as a flower-arranging cupboard.

A visit to Hampton Court Palace

Keen to know more, last week I took the train to Hampton Court to meet Charlotte.

If you haven’t been to Hampton Court, you really should. Set by the Thames a half hour train journey from Waterloo, it’s a glorious mix of Tudor and Baroque palaces, surrounded by spectacular gardens. The Tudor part includes Henry VIII’s jaw-dropping Great Hall, chapel and apartments, while the Baroque side features a vast sweep of apartments originally commissioned by King William III and Queen Mary II.

On the day of my visit, it had been raining hard and the moat was flooded, the lawn underneath transformed into temporary pondweed. As Charlotte and I walked across the Tudor Clock Court towards the Baroque apartments, we came across a group of schoolboys looking for Henry III. “He’s usually around here somewhere,” Charlotte assured them. “Have a look up in the Great Hall.” The boys sped off on the trail of the monarch, a costumed actor supplied by Past Pleasures, the company that ran our storytelling workshop.

From a Tudor passageway, we emerged into Fountain Court, an internal courtyard created for William and Mary. “From her state apartments opposite, Queen Mary would have been able to watch servants in their blue uniforms dash from room to room here collecting spices and confectionery,” Charlotte explained. 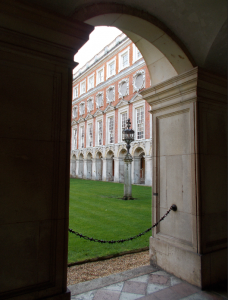 “The main kitchens were at a distance from the living quarters to cut down the risk of fire. But in this series of rooms, they would have kept a huge stock of spices such as nutmeg, cardamom and cloves, and the cooks created elaborate confectionery for royal banquets.”

And thanks to Charlotte’s research, led by curator Polly Putnam, we now know that there were also two rooms dedicated to chocolate underneath these elegant stone archways: a kitchen and a preparation room.

In Georgian times, chocolate was an exotic luxury. George I had his own personal chocolatier, Thomas Tosier, who was in charge of preparing the royal cup of hot chocolate for the king’s breakfast each day. This involved roasting the cocoa beans, then mixing them with spices such as chilli, aniseed and allspice, to create a rich, spicy concoction.

“Tosier was in a very privileged position,” said Charlotte, “because he had the king’s ear for a few minutes each day.” 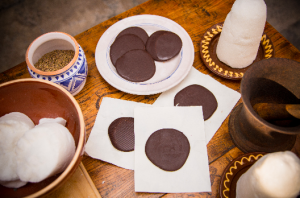 Chocolate’s popularity was not limited to royal households. Although coffee and tea reigned supreme, chocolate houses also sprang up around London, catering to a clientele that could afford this luxurious new drink. Tosier owned The Chocolate House in Blackheath, run by his wife, Grace. A portrait of Mrs Tosier at Hampton Court shows quite a character, with a large-brimmed hat, fashionable ringlets and a posy of flowers at her bosom.

Hot chocolate remained a favourite with George I and George II, but by Victorian times, the monarchy was no longer staying at Hampton Court. So the rooms dedicated to chocolate making were given over to grace and favour residents.

By the 21st century, there were rumours that a chocolate kitchen had once existed at Hampton Court, but no one knew where it was. Charlotte was given the task of sifting through the palace’s files to find some clues. When this drew a blank, she headed off to the National Archives at Kew to immerse herself in dusty, leather-bound tomes. 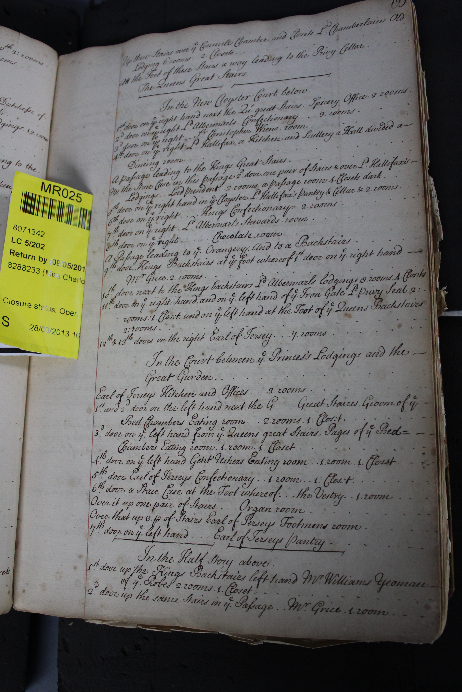 “It involved some extremely long days,” she said. “Most of the archives are records of royal warrants, so they weren’t relevant at all. But eventually I found an inventory, which was an unusual document. It was written in 1710, but gave a record of the rooms in the palace after the death of William III in 1702. By then, I’d become very skilled at spotting the word ‘chocolate’, and saw that the inventory described a list of rooms around Fountain Court, including a ‘chocolate room’.”

“When I saw that phrase, I felt a rush of excitement mixed with a profound feeling of relief that we had found the missing piece of evidence,” she said.

Secrets behind the floral displays

Charlotte rushed back to Hampton Court to find out which door was the “8th door on ye right” mentioned in the inventory – and discovered it was a small room packed to the rafters with flower-arranging equipment. “The king’s chocolate kitchen was being used as a storage room for the palace’s annual Florimania show,” said Charlotte. “It was full of vases and oasis. At first sight, there was no evidence at all that it had ever been a kitchen.”

Once cleared, the room revealed its secret history. On the back wall, there was a pulley system above the fireplace which would have been used to raise and lower a metal cylinder which would have rotated over the fire to roast the cocoa beans contained inside. A fold-down wooden table was a Georgian original, made for preparing chocolate rather than arranging flowers. And a brick structure in the corner, covered over with a wooden board, was a charcoal brazier formerly used to cook the king’s hot chocolate.

In February this year, the newly-discovered chocolate kitchen was opened to public display, alongside a chocolate preparation room, where the hot chocolate would have been decanted into porcelain cups surrounded by special pewter holders. 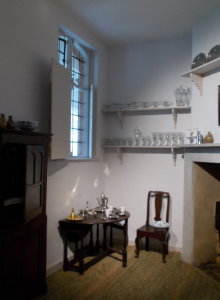 The chocolate preparation room, featuring a display of elaborate porcelain and silverware

For Charlotte, all her hard work has paid off. She said: “I still feel I’m a lowly intern at the palace,  but to be involved in such a wonderful project – and have such a fantastic find – is something special. This is a great achievement, and something that I will always remember from my time at the palace.”

Charlotte has a few tips to pass on to anyone who’s undertaking painstaking archival research.

Find out more about: